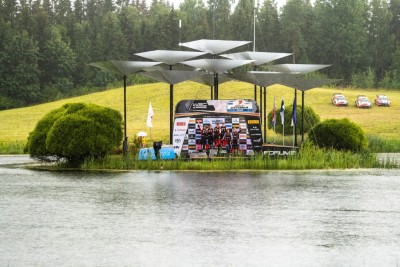 Today, on November 25th 2022, the FIA World Motor Sport Council confirmed the 2023 FIA World Rally Championship calendar. The upcoming season's calendar includes 13 rounds, among which there are already familiar host countries, returning countries, as well as quite new countries that have not hosted a WRC round before.

Rally Estonia has the great honour and privilege to once again be a part of the pre-season official WRC calendar alongside the big countries and organizers with long traditions. For the fourth year in a row WRC Rally Estonia 2023 will be organized in Estonia and will be held in Tartu and on the roads of Tartu, Otepää, Elva, Kanepi, Kambja, Peipsiääre and Mustvee rural municipalities on 20 – 23 July.

When in the last two years Estonia has been the seventh round of the WRC rally season, next year the eighth round of the WRC season will be held on the fast and winding gravel roads of Southern Estonia. Before Rally Estonia the WRC carousel will stop in Kenya and after Estonia the WRC drivers and teams will head across the gulf to Finland. The competition taking place on the third weekend of July means that rally fans from Estonia and elsewhere can once again enjoy the wonderful Estonian summer and nature and, of course, the adrenaline-fuelled Rally Estonia.

For the fourth year in a row WRC Rally Estonia will be hosted by the Estonian National Museum in Tartu, where in addition to the Rally HQ, there will also be a Service Park. The start and finish podium moved back to Tartu Town Hall Square this year and will delight rally fans there in July next year as well.

"We are happy that the tradition of Rally Estonia will continue next year and we are very grateful for the contribution and support of the Estonian state, local governments, all private sector sponsors and of course rally fans. Of course, big thanks to the WRC Promoter and FIA ​​for their excellent cooperation and trust. Rally Estonia is a large family event, which brings an economic impact of approximately 10 million euros annually and reaches more than 800 million pairs of eyes around the world via WRC All LIVE. In addition to the local emotion, Estonia is gaining even more recognition every year as an innovative country to travel and invest in. Estonians have caught the eye of the world and earned recognition as innovative and professional organizers of big events.

This path was opened many years ago by the organizers of Otepää Skiing World Cup stage and it is nice to note that more and more big sports events have come and will come to Estonia. In addition to Rally Estonia, the world-renowned Ironman, Tallinn Marathon, World Cup stage of biathlon organized this year in Otepää, Tallinn Open WTA tournament and many other sports competitions are among the top performers. Besides, it is a pleasure to note that in 2027 the biathlon world championship titles will be determined in Estonia. The WRC Promoter wishes to continue cooperation with Estonia in the future and has made an offer to Rally Estonia until 2026. Due to the global developments the situation is complicated, but if everything works out, we would like to sign the contract for the next three years in spring 2023."

"It is a pleasure to note that Rally Estonia is the top event of the motorsport world, i.e. the WRC round, for the fourth year in a row. We cannot take it for granted, as this has involved great work and effort of many people and agencies. Now that FIA ​​has confirmed the calendar and the dates of the Estonian WRC round are known, rally fans should already start making plans for next summer, in order to spend a nice and exciting weekend in Southern Estonia at the end of July in the company of Rally Estonia and friends. Despite the difficult situation both in the world and here in Estonia, we are once again going to give our best with the entire team to organize the top-level world rally championship round. Similar to this year, our goal is to move back to the traditional rally and offer rally fans even more diverse experiences on site at the stages and in the spectator areas."

Just like last year, at the end of this year WRC Rally Estonia passes can also be purchased, so that these could be put to the gift bag of the biggest rally fans for Christmas. Until the 31st of January 2023 rally fans have an opportunity to buy the tickets at a special price. Rally passes will be available for purchase on rallyestonia.com starting from Monday, the 28th of November at 10 o’clock.

The organizers have taken a step forward towards a more sustainable future, by not continuing with physical wristbands and bringing only digital rally passes on sale for the first time. "We believe that, in addition to a more environmentally friendly solution, it also makes the consumption of the rally and the purchase of the tickets significantly easier and more convenient” said Camilla Themas, Marketing Manager of Rally Estonia.

Rally Estonia is a round of the 2023 FIA World Rally Championship, which will be held in Tartu and on the roads of Tartu, Otepää, Elva, Kanepi, Kambja, Peipsiääre and Mustvee rural municipalities on 20-23 July 2023.