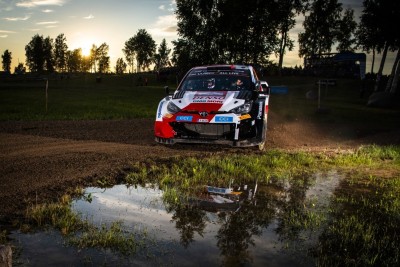 On Saturday, 16 July, the second full day of Rally Estonia, the seventh round of the FIA World Rally Championship, was held. The total of nine stages and 95.02 stage kilometers were passed on Saturday.

Evans / Martin had a better start in the morning, taking 0.6 seconds back from Rovanperä / Halttunen. From there, however, the leaders of the World Championship and Rally Estonia did not give up seconds to their competitors and won seven stages in a row. By the end of the day the Finns' lead over the second-placed British had increased to 29.1 seconds.

Tänak / Järveoja, like on Friday, were twice out of the TOP3, but most importantly, they stayed firmly in the third place. The Estonians are 1.11.5 behind the leaders before Sunday's stages.

“You always want to do the best you can. I knew that we were not ready to come here, but you still hope and want to give a good show to these people. We did all we could from our side and also, important to look into the future as well. It’s not easy to catch these guys but we are definitely working on it. Many ideas where we need to improve. The potential is there," Tänak said at the Meet The Crew session that ended the day in the service park of the Estonian National Museum.

The day ended with the victory of Adrien Fourmaux / Alexandre Coria (Ford Puma Rally1) in the special stage taken place in Raadi Manor Park. For Fourmaux, it was the third stage victory of his WRC career and the first in Europe.

Andreas Mikkelsen / Torstein Eriksen (Škoda Fabia Rally2 Evo) finished Saturday as the leaders in WRC2. The Norwegians' lead before Sunday's stages is 10.6 seconds ahead of Teemu Suninen / Mikko Markkula (Hyundai i20 N Rally2). Georg Linnamäe (Volkswagen Polo GTI R5) holds the eighth place as the best Estonian in WRC2, who together with the British co-driver Craig Drew lose to the leaders by 4:40.9.

Robert Virves / Julia Thulin (Ford Fiesta Rally3), who won six out of eight stages on Saturday, hold the third place in the Junior WRC class before the last day of Rally Estonia and are 44.7 seconds behind the leaders.

The round of Terminal Oil Estonian Championship ended with Saturday's rally day. The best of the local championship round were Egon Kaur / Silver Simm (Volkswagen Polo GTI R5), who beat Georg Linnamäe / Craig Drew by 18.3 seconds and Robert Virves / Julia Thulin by 57.7 seconds.

Saturday's rally day ended in Raadi Manor Park and Sunday will also start there. But this time the stage will be in a longer (6.56 km) version, after which the drivers will head to Kanepi and Kambja stages. This year's WRC Rally Estonia Wolf PowerStage finishes by the picturesque Leigo lakes, where the TOP3 pairs of this year's WRC Rally Estonia will be awarded on a special podium located on the island of the largest lake. The closing ceremony of the rally will be ushered in by a special dance show from Shaté Dance School at 16:00 and at 17:00 the winners of this year's WRC Rally Estonia will drive in front of the crowd on Tartu Town Hall Square. The unique victory trophies made of precious metal from old mobile phones will be handed over to the winners.

WRC Rally Estonia is the round of 2022 FIA World Rally Championship which will be held in Tartu and rural municipalities of Tartu, Otepää, Elva, Kanepi, Kambja, Peipsiääre and Mustvee on 14-17 July 2022.