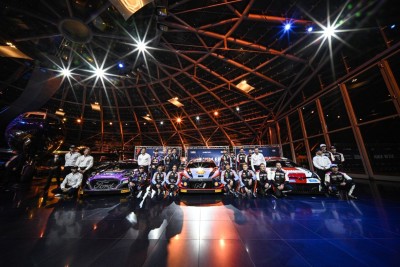 On Saturday January 15th, the Rally1 hybrid cars that will compete in the FIA ​​World Rally Championship season 2022 were introduced to the world in Salzburg, Austria. WRC Promoter opened the season with an amazing show at RedBull Hangar 7, home to aircrafts, helicopters and F1 cars all in the RedBull collection.

In the 50th season of the World Rally Championship, all three manufacturers Ford, Hyundai and Toyota are bringing new cars to the rally stages which are built according to the new technical regulations of the FIA. The new hybrid challengers blend a 100kW electric motor with a competition-proven 1.6-litre turbocharged petrol engine, which has powered the sport’s top-tier cars since 2011.

The new regulations mean that the co-operation between the turbocharged engine and the hybrid drive will be improved in the specific acceleration capacity of the race cars and will be able to run and pass through the maintenance area with electric power.

The new hybrid cars are powered by 100% fossil-free fuels and are a step towards a more sustainable future for the series.

The new FIA President Mohammed bin Sulayem, the first non-European president of the FIA's 118-year history of the International Motorsport Association, also gave a speech and took part in a photo shoot with the WRC stars at the opening event of the World Rally Championship season.

“The enthusiasm for the FIA’s new technical regulations has been very much in evidence in recent months and the event further underlined the momentum coming from the teams and manufacturers, with Rallye Monte-Carlo just a few days away.Beside the hybrid technology adding a new dynamic layer of performance combined with safety improvements, Rally1 cars will be using 100 per cent sustainable fuel and work is also ongoing to achieve greater sustainability in the organisation of each round of the series. I look forward to an exciting season!”

The start of the 2022 season of the FIA ​​World Rally Championship is already taking place in Monaco this Thursday, starting with the legendary Monte-Carlo Rally, which is celebrating its 90th anniversary.

This year, the WRC series is already celebrating its 50th anniversary season, and the calendar includes 13 stages, whereas for the third year in a row, World Championship will be held on the exciting and spectacular roads of Peipsiääre and South Estonia.

WRC Rally Estonia 2022 will be run as the seventh race of the season on the 14th to 17th of July on the roads of Tartu, Otepää, Elva, Kanepi, Kambja, Peipsiääre and Mustvee. The race control, service park and media center will be located in Tartu, in the Estonian National Museum and its territory, whereas the start and finish podium returns to its traditional place in the center of Tartu, on the Town Hall Square.