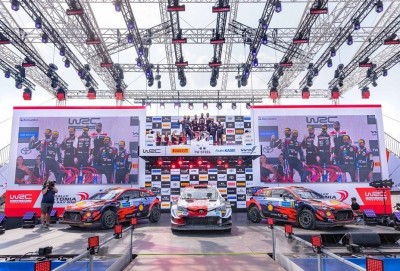 Today, on 15 October 2021, the FIA World Motor Sport Council gathered for the third time this season, where the calendar of the 2022 FIA World Rally Championship was approved. For the second year in a row Rally Estonia is honoured to be a part of the pre-season WRC calendar and for the third year in a row to organize the WRC round in Estonia. Rally Estonia will be held on the roads of Tartu, Otepää, Elva, Kanepi, Kambja, Peipsiääre and Mustvee rural municipalities from 14th  to 17th of July.

Similarly to this year, Estonia is the seventh round of the World Rally Championship season. Prior to Rally Estonia, the WRC carousel will have a stop in Kenya and after Rally Estonia, Rally Finland will be waiting for the World Championship competitors. One of the traditions of Rally Estonia has been that, if possible, the event has always taken place in July and this year as well. This means that rally fans from Estonia and elsewhere can once again enjoy great summer and nature of Estonia and, of course, Rally Estonia. If in case of the previous two World Rally Championships the organizers of the rally had to take strict corona restrictions into account, Rally Estonia team today works in faith and hope that the 2022 event can take place again under normal conditions and offer a great rally experience.

For the third year in a row Rally Estonia will be hosted by the Estonian National Museum in Tartu. The museum will also accommodate the service area and a podium in addition to rally centre.

Urmo Aava, Director of Rally Estonia: “There are not many countries where the World Rally Championship has taken place three times and it is a great privilege for us. All this is a huge team work. It is not possible with an individual effort, but with everyone's contribution. Rally Estonia is supported by the Estonian state, local governments, all sponsors and a large organizing team of almost 3500 members. We really hope that we can organize Rally Estonia in 2022 as close to normal conditions as possible. We are already working on how to make the most of the experience of the previous 11 years and organize even more memorable and fierce Estonian round of World Rally Championship next year.”

Tarmo Hõbe, Commercial Director of Rally Estonia: “The official dates of the WRC round of Rally Estonia 2022 have now been announced and we are pleased to state that the rally will be held traditionally in the middle of July. Today we are planning the third Estonian World Rally Championship in the belief that the conditions caused by corona are significantly milder or completely gone. We really hope to offer a rally weekend full of passion and great experiences, where fans can choose a suitable place to watch. Even today, whereby the dates are officially in place, it is a good opportunity to start planning a mid-summer weekend with family and friends and book a suitable accommodation early. Rally passes will be on sale as soon as all necessary preparations have been made. "

Rally Estonia is the round of the 2022 FIA WRC World Rally Championship, which will be held in the City of Tartu, Tartu, Otepää, Elva, Kanepi, Kambja, Peipsiääre and Mustvee rural municipalities on 14- 17 July 2022.