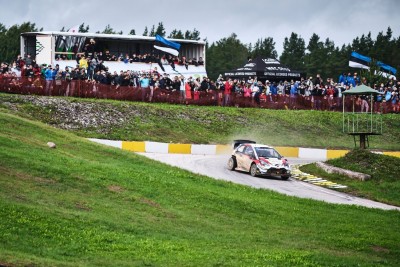 It’s fast, it’s furious and it’s frantic – and the great news for speed lovers is that this week’s Rally Estonia (15 - 18 July) has an extra day’s action packed into its schedule.

The three-day short format with which Estonia broke through the pandemic to restart the FIA World Rally Championship last September has been increased to a more traditional four. It brings high-speed 24 special stages covering 324.16km to the biggest motorsport event in the Baltics.

Thursday evening’s start ceremony with famous Estonian artist at the Estonian National Museum service park at Tartu’s Raadi Airfield leads directly into the Visit Estonia Tartu (1.64km) parkland stage, just a few hundred metres away. Both opening and ceremonial start are the ones to watch.

Friday’s opening leg is centred around Otepää in south Estonia, regarded as the country’s winter capital. A double loop of Arula (12.68km), Otepää (17.05km), which contains the spectacular Alaküla jump, Kanepi (16.54km) and Kambja (17.85km) are separated by service.

The eight tests total 128.24km and while the names are familiar from 2020, the routes have been modified to keep crews on their toes.

Saturday brings four challenging new stages for the longest leg of the weekend, containing 132.18km of action. It follows the same format, with identical loops driven morning and afternoon.

Six tests covering 52.10km comprise Sunday’s finale. Neeruti (7.82km) and Elva (11.72km), south of the host town, are followed by Tartu vald (6.51km). All three are repeated, with the latter forming the Wolf Power Stage and finishing in the service park ahead of the podium ceremony.

Only Sunday's Elva test is the same as last year.

If you’re going to base a round of the FIA World Rally Championship around a museum, it needs to be a cool one.The Estonian National Museum definitely qualifies. Just over 10 months on from the nation’s WRC debut, we’re back. And we’re ready for the fast show.

In terms of gravel rallies, rounds six and seven couldn’t be more different – no two countries can showcase the true diversity of rallying at the highest level like Kenya and Estonia.

Last month’s Safari Rally Kenya provided some of the roughest, toughest and sandiest stages the sport’s ever seen. This week’s roads around Tartu will be billiard-table smooth by comparison and eye-wateringly quick in the majority. And, there will be less giraffes.

Tartu’s old town is the place to be when you’re not on the stages. Packed with cool cafes and pop-up rally shops, you can land yourself a hat, T-shirt or jacket (you won’t be needing one of those this week – it’s going to be 30°C, admittedly with the odd thundery shower), but it’s best to remember this is Tänak town. So, if you’re in the market for some OT-branded kit, get in early.