Toyota is the official car partner of WRC Rally Estonia 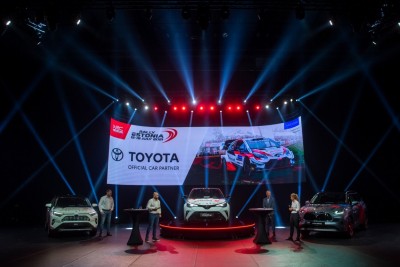 Toyota is the official car partner of WRC Rally Estonia

Toyota has been a long-term partner of WRC Rally Estonia round of FIA ​​World Rally Championship and in 2021 a new level of cooperation is taken. Toyota is the official car partner of Rally Estonia, by providing the rally organization team with top-level and environmentally friendly full hybrid electric cars. Today, on 6 May, the first three hybrid cars - Toyota Highlander, Toyota RAV4 and Toyota C-HR - were handed over to the rally organization team. In total, more than 20 Toyotas are in use before and during Rally Estonia, and the main emphasis is just on hybrids.

The cooperation between Toyota and WRC Rally Estonia combines Estonia's most preferred car brand and most anticipated sports event into a powerful symbiosis, supported by common understandings and values. With the longest experience of car brands and the widest range of electrified models, Toyota offers the organization team of WRC Rally Estonia a diverse selection of hybrid models that are suitable for different tasks. Toyota's wide range of hybrid models ranges from the compact Toyota Yaris to RAV4 and Highlander SUVs, all of which offer the lowest fuel consumption and environmentally sustainable mobility.

It is very important for Rally Estonia that common values ​​are shared with all sponsors and partners. Strategic cooperation with Toyota is based on the principles of shared sustainable development. Toyota has been developing hybrid electric car technology for almost 25 years with the goal of reaching not only zero-emission mobility, but beyond. In addition to full hybrid electric cars, the Toyota model range also includes the Mirai zero-emission hydrogen electric car. It won't be long before the next stage is to see hybrid electric cars in the WRC series.

" Akio Toyoda, President of Toyota Motor Corporation, promised that Toyota cars would no longer be boring, and this promise has been fulfilled. The GR Yaris, which debuted at Rally Estonia as a safety car last year and which captivated both rally enthusiasts and professional drivers as a purebred sports car, has become a real success story. This is confirmed by the receipt of additional orders and the increase in production volume. The way Toyota is developing its full hybrid electric car technology and experience from rally series will lay a solid foundation for the future car technologies and we look forward to the hybrid electric cars reaching the WRC series.”

"We have had a long-term cooperation with Toyota, and taking the next step, where Toyota is our official car partner, was a natural step given our longer-term goals. For us, as the organizers of the world-class rally event WRC Rally Estonia and the founding member of the Green Tiger, environmental and nature protection and sustainability are of paramount importance in order to preserve the clean and untouched nature of Estonia. We wish to be innovators and pioneers in this field all over the world. Together with Toyota, we can implement the green strategy very vigorously already this year. In addition to the Toyota full hybrid electric cars used by the organization team, we offer free car access to all those who come to Rally Estonia with a hybrid, electric or hydrogen car. Related to these and other joint activities we will be able to achieve significant and tangible results already this year in order to contribute to making the whole Estonia greener.”

Rally Estonia is the round of the 2021 FIA World Rally Championship, which is held in Tartu and in rural municipalities of Tartu, Otepää, Elva, Kanepi, Peipsiääre and Mustvee on 15-18 July 2021.