Rally Estonia is the round of the World Rally Championship 2021 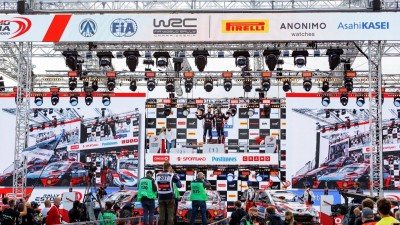 Today, on 9 October, the FIA ​​World Motor Sport Council approved the 2021 FIA World Rally Championship calendar by which Rally Estonia was confirmed as the official round of one of the most prestigious motorsport series in the world which will be held in Tartu and Southern Estonia already on 15-18 July.

Rally Estonia, held in September this year, was the first global title competition with such a large audience that was organized under COVID-19 conditions and ended without any cases of infection. The fact that the competition organized in Estonia will be in the WRC calendar next year is a great recognition for Estonia as the organizing country.

Prime Minister of the Republic of Estonia Jüri Ratas: “Estonia has become a world-class rally country. The opportunity to bring the whole rally world back to Estonia and organize an international competition on a larger scale means the trust that we have the ability to offer rally fans even more than before. We proved this with an exemplary event that was organized by Rally Estonia team in cooperation with sponsors and Estonian people with just 63 days this year. My heartfelt thanks to the Fédération Internationale de l'Automobile FIA ​​and WRC Promoter for the important recognition for the whole of Estonia, and I wish the organizers of the next Rally Estonia only success!”

Minister of Culture of the Republic of Estonia Tõnis Lukas: “In addition to the fact that an Estonian is a world rally champion, we are also masters in organizing world-class rallies! As long as we have not been given the right to organize the Olympic Games, we will organize every competition as if we were organizing the Olympics! I am extremely pleased that next year Rally Estonia will take place as a WRC event and will take the beautiful natural and cultural sights of Southern Estonia and Jõgeva county to hundreds of millions of people around the world. All the prerequisites for success are there - experience in organizing an ideal competition in difficult circumstances, good cooperation between the organizers and the state and an outstanding Estonian audience.”

Janis Kaal, member of the management board of the Estonian Autosport Union: “The confirmation of the inclusion of Rally Estonia in the 2021 World Championship calendar was expected and not at all surprising: this year the organizers proved that competitions at the highest level are excellently handled even in the most difficult conditions within an extremely tight time frame. Undoubtedly, this recognition is for the thousands of people who took part in the preparation and conduct of the rally in any way this year. I agree with those who say that the World Championship event on the home roads is the best opportunity for the local rally elite to unlock their potential and show their talent. I point out the fact that has perhaps been not much mentioned so far - the experience and information gained at similar sporting events that meet the highest standards is passed on by contributing to the rise in organizational level of local motorsport events. We hope that next year we can deal less with managing the health risks and that more resources can thus be used to create positive emotions.”

Urmo Aava, director of Rally Estonia: “The organizing team of Rally Estonia has developed within 10 years into a team that can overcome even seemingly insurmountable difficulties. But we have not done it alone. We have had strong partners throughout the years in the private, public as well as international sectors. In 2020 we had a unique opportunity to organize the first Estonian round of the FIA World Rally Championship. We thank the Estonian state for its comprehensive support through these years and the Fédération Internationale de l'Automobile FIA and WRC Promoter for their trust and opportunities. Estonian rally fans have been praised all over the world and I agree with the latter. At this year's Rally Estonia, the rally audience showed themselves at their best in these difficult circumstances. When looking back today at Rally Estonia that was held in September, I can say for sure that together we succeeded 101%. This is confirmed by the fact that in 2021 Rally Estonia will be a round in the calendar of the FIA World Rally Championship.”

Rally Estonia is the round of the 2021 FIA World Rally Championship which will be held in Tartu and Southern Estonia on 15-18 July 2021.

Credit to the picture in attachment: Jarek Jõepera