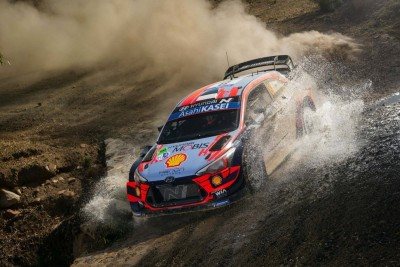 The WRC Rally Estonia, round of the FIA Rally World Championship will take place on the roads of South Estonia for the first time in September. Visit Estonia is organizing a social media campaign, inviting rally friends from all over the world to virtually show their support for their favorite teams, as for many it is not possible to come to Estonia this year.

"Drivers, cars and teams are coming, but not all fans from abroad can come this time. However, Estonia as a highly digitalized country allows fans to support their idols - we will bring a virtual fan army to the stages," said Liina Maria Lepik, head of Visit Estonia.

To take part in the campaign, you need to record, alone or with friends, a short clip of how you root for your favorite team or driver, upload it on the campaign page www.virtualrallyfan.com/rallyestonia or on social media. To make it easier for us to collect clips, you should add @VisitEstonia, @RallyEstonia, #VirtualRallyFan #WRC #RallyEstonia and a hashtag of your favorite team, such as #TeamTanak, to your social media post.

"We, in turn, show these videos to the drivers on the big screens at the end of the special stages and we also share the emotion on social media so that everyone can participate in the rally experience as much as possible," commented Lepik.

In addition to the fan army campaign, Visit Estonia will introduce Estonia on the WRC, Rally Estonia and Visit Estonia digital and social media channels through exciting videos, the main character of which is the beloved WRC commentator Becs Williams. In the five-part mini-web series, Williams will meet exciting guests, introduce what is special about Estonia and shows rallying world from behind the scenes.

“Major events taking place in Estonia are a great motivation for visitors to travel here. As long as physical travel between countries is complicated, we will do our best to introduce Estonia and its capabilities, beauty, originality and opportunities through all possible channels. We have a long-term perspective and we believe that tourism will recover. By that moment, we hope that the hunger to travel to Estonia has grown even more," Lepik noted.

The Visit Estonia is a brand of Estonian Tourist Board of the Enterprise Estonia and has been operating with Rally Estonia since the beginning of the rally. In cooperation with the WRC and Rally Estonia team, it is expected to reach 100 million viewers this year.

Rally Estonia 2020 is held on 4-6 September on the roads of Tartu, Otepää, Elva, Kanepi and Kambja municipalities. Rally Estonia is a round of the FIA World Rally Championship.