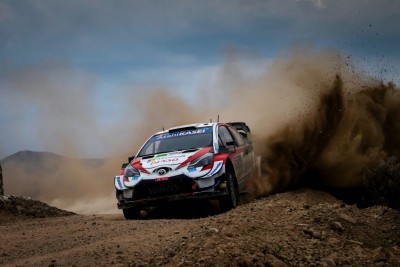 The Hyundai Motorsport list includes a total of three crews: Ott Tänak and Martin Järveoja, Thierry Neuville and Nicolas Gilsoul, and Craig Breen and Paul Nagle. Pierre-Louis Loubet and Vincent Landais will be driving on behalf of the French Hyundai 2C Competition team, for which it will be their first start in a WRC car in the World Championship series.

There are three crews on the M-Sport Ford World Rally Team list. They are Esapekka Lappi and Janne Ferm, and Teemu Suninen and Jarmo Lehtinen, and in the third car will be Gus Greensmith and Elliot Edmondson.

Altogether are 13 WRC cars are registered for Rally Estonia, and in addition to the above factory team drivers are privateers, Georg Gross and Raigo Mõlder (Ford Fiesta WRC) and Finnish Kimmo Kurkela and Reeta Hämäläinen (Ford Fiesta WRC).

In the Junior WRC class, which are front-wheel drive Ford Fiesta R2 cars, there are currently 12 teams registered. Among them are Estonians, Ken Torn and Kauri Pannas, who have just recently won their class at the FIA ​​ERC round at Liepaja rally and after the first round of the Junior WRC in Sweden are third place in the points standings.  The current leaders in the Junior WRC series, Swedes Tom Kristensson and Joakim Sjöberg, and second place Latvians, Martins Sesks and Renars Francis, are both planning to participate in Rally Estonia. Making their debut in the World Championship series are Estonians Robert Virves and Sander Pruul. Also registered are Kaspar Kasari and Jakko Viilo (Ford Fiesta R2), and Gregor Jeets and Kuldar Sikk (Ford Fiesta R2).

For the first time ever, Rally Estonia is a round of the FIA ​​World Rally Championship taking place from the 4th - 6th of September on the local roads of Tartu, Otepää, Elva, Kanepi and Kambja municipalities.