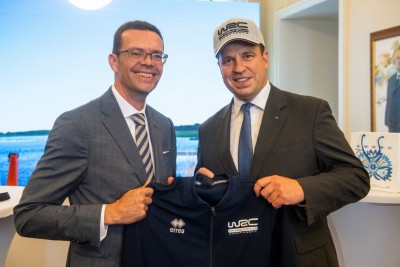 Today, July 2, is a historical day in Estonian autosport. An agreement between WRC Promoter and Estonian Autosport Events was signed at the Estonian Prime Minister’s Office, Stenbock House. Estonia becomes the 33rd country in the world to host a round of the FIA World Rally Championship. Rally Estonia, a round of the WRC is held on 4-6 September 2020. A memorandum of understanding was signed by Estonian Prime Minister Jüri Ratas, Minister of Culture Tõnis Lukas, Minister of Finance Martin Helme, Managing Director of WRC Promoter Oliver Ciesla and Director of Rally Estonia Urmo Aava.

After a half-year break, the World Rally Championship series will restart in Estonia, when Rally Estonia will run on 4-6 September. The historical Rally Estonia is held on the roads of Tartu, Otepää, Elva, Kanepi and Kambja municipalities. The centre of the rally is the Estonian National Museum in Tartu, where the podium, rally HQ, service park and press centre are located.

WRC Rally Estonia will be held in accordance with all the terms and conditions of the COVID-19 situation. The memorandum of understanding states that the Estonian Government will form a special committee for the purpose of minimizing the risk of coronavirus at Rally Estonia. The committee consists of representatives from Estonian Rescue Board, Estonian Police and Border Guard Board, Estonian Road Administration, Estonian Health Board, State Forest Management Centre and the Ministry of Interior. WRC Promoter and FIA will provide international know-how and practices in this matter.

Jüri Ratas, Prime Minister of Estonian Republic: „Today’s historical moment is a result of the consistent work by many people during the years. With this step, Estonia once again confirms its position in the world of rallying: in addition to being the homeland of the World Champions, today Estonia has become an organiser of a World Rally Championship event. This is more than a unique opportunity to organise a global sport event in Estonia. Having a FIA World Rally Championship round in Estonia introduces our country in the world and contributes to our economy and regional development. Additionally, this has a positive impact to Estonian motorsport and its development. I acknowledge and congratulate the Rally Estonia team, their partners, local municipalities and WRC Promoter! Their joint effort and actions have contributed to the fact that in September the Estonian people can cheer the reigning World Champions in their title chase on their home roads.”