Estonian Autosport Union and Rally Estonia continue their joint efforts to host a WRC round in Estonia. 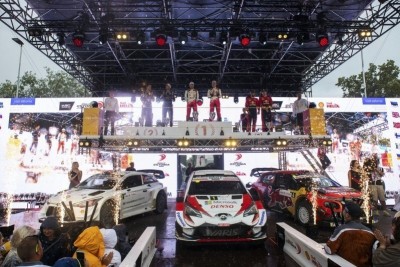 A renewed 2020 WRC calendar should be announced in the coming days. Due to the coronavirus pandemic several WRC rounds have been cancelled. There is understanding that at least seven rounds must be held in order to hand out world championship titles. The situation requires new solutions and Estonian organizing team is willing to find and offer these to the World Rally Championship series. This might open a door to Estonia to host a WRC round in 2020 for the first time.

Urmo Aava, Rally Estonia director: „For the last 10 years we have been building our team and rally together with Estonian Government and sponsors. In 2014 Rally Estonia was the best round in FIA European Rally Championship series and this title opened many international doors to us. Also, it introduced Estonia as a country and travel destination. After three successful years in FIA ERC our team felt that we would like to move ahead and aim for the highest level in world rally – WRC. We started the work in 2017, in the next year we hosted a test rally and in 2019 the first official WRC Promotional Event. All these years we have laid a strong foundation to be able to offer an attractive as well as safe rally to the FIA and WRC Promoter. I can confirm that that we have received a proposal from the WRC Promoter to organize a WRC round in Estonia in 2020. We have submitted applications to several institutions and the answers to them should arrive in the following days. After that we can start negotiations with the FIA and WRC Promoter. Our goal is to get best possible conditions to Estonia and Estonian autosport to organize a WRC round here and also get a maximum worldwide coverage. It is important to all the parties involved to work together in order to get maximum value from this event. The Rally Estonia team and Estonian autosport in general are very glad and flattered about this proposal. Our common goal is to host the best possible event which introduces Estonia and has an economic impact.”

Janis Kaal, Chairman of the board of Estonian Autosport Union: “We are in a good situation where in addition to the reigning World Champions we also have local competence to organize top class sport events. Urmo Aava and his team have proved during the years that they are capable of organizing an event at the WRC level. Also, we are thankful that the Estonian government has been a great supporter. To organize an event at this level without the funding from government is impossible.”

The coronavirus pandemic has forced our sport to take a break. It has given us an opportunity to have discussions about the future of the autosport. Together we have reached an understanding how to strengthen cooperation and support the development of autosport. This helps us to bring the next World Championship titles and World Championship rounds to Estonia and not only in rally.