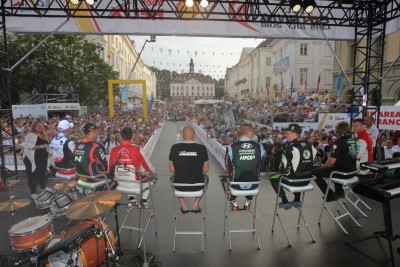 The opening ceremony of Official WRC Promotional event Shell Helix Rally Estonia is warmed up by Cityflash feat. Laura-Ly at 19:50. After that the TOP drivers will choose their starting positions. Next on the podium are WRC drivers who answer questions in WRC press conference style as it will be hosted by Becs Williams from WRC. The drivers attending the press conference are Ott Tänak, Elfyn Evans, Andreas Mikkelsen, Esapekka Lappi, Craig Breen, Teemu Suninen ja Markko Märtin.

After that, at 21.00 are expected to the stage last year winners and current WRC leaders Ott Tänak ja Martin Järveoja driving Toyota Yaris WRC. They will be followed all other drivers.

After the cars have driven over the podium it is time for the highlight of the evening. The official concert of Shell Helix Rally Estonia starts at 22:45 and is packed with stars from Estonia and Latvia. Those two Estonian artists are familiar to almost everyone. Anne Veski has enjoyed her popularity for decades and she is still one of the big names in Estonia. Nublu is an Estonian hip-hop artist who flew like a rocket to the Estonian music scene last summer. Latvia is represented at the concert by Musiqq. Their style is pop and R&B.