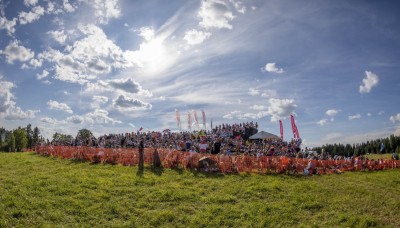 Shell Helix Rally Estonia held on 12-14 of July includes total 15 stages. All of them offer for the spectator’s special areas which are carefully selected by the organizers. The criteria is that those areas are easy get in and attractive. Some of the areas offer additional values like big LED screen to watch the same stage live, entertainment and also place for camping and caravans. Best overview is in the official Shell Helix Rally Estonia magazine which is available both on paper and digitally. Here are some of the spectator areas that organizers recommend.

On Friday the rally action is in Tartu. LHV autolaen Autoexpo, next to the podium in Tartu Raekoja square opens at 15.00. From 18.00 the action starts in the podium and from 20.00 the official opening of Shell Helix Rally Estonia starts. Friday ends with free concert on the podium.

Maaritsa stage, which will be passed through twice on Saturday (SS1, SS3) offers Leigo spectator area. This area is on the Leigo tourist farm territory. It has beautiful views over Leigo lakes. The spectator area is located on a natural hillside each rally car can be seen for more than 30 seconds taking a sharp hairpin, jumps and curves. Additional values are live broadcast on the LED screen, catering, Sportland Rally Shop, Iglu handcrafted sauna, toilets and camping area and caravan parking open from July 12. Maaritsa stage starting times are on Saturday 9.23 ja 12.04

On Sunday the schedule contains six stages, last of them Tartu City Special with five official spectator areas. This stage is possible to follow from the big LED screens on the podium at Tartu Raekoja square. To be mentioned that after the last stage will the cars head straight to the finish podium. Tartu City Special starts at 15.15 and podium 16.00.

It is important to remind that all the cars will head to service between the stages. It is located at the Tehvandi Sport Centre in Otepää.