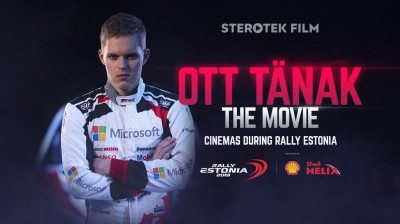 Shell Helix Rally Estonia, the Official WRC Promotional Event held on 12.-14 of July brings to Estonia all WRC Manufacturers teams. Ott Tänak is one of the top WRC drivers competing here and during the weekend movie about his way to the top is in the cinemas in South-Estonia.

After the premiere in April almost 95 000 people have seen the movie, which makes it the most successful documentary in Estonia. The movie is still very popular in Estonia and many foreign fans are coming from abroad. So, the movie theaters have decided to add “Ott Tänak - The Movie" special screenings to their schedule. Starting from July 10 “Ott Tänak - The Movie" is shown in Võru cinema Kannel and in Tartu in Cinamon and Apollo cinemas. Apollo cinema has a special price for the rally fans with rally pass.