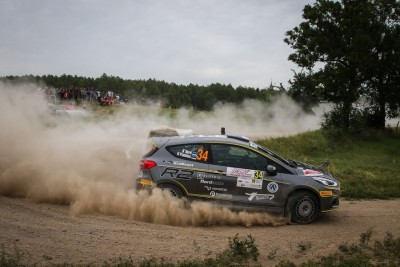 Shell Helix Rally Estonia is a round of Estonian championship and Estonian Junior Challenge is the series held inside of Estonian championship. It is organized in cooperation between M-Sport, Pirelli, MM-Motorsport and OT Racing. The main prize of the season is worth 90 000 euros. There are several conditions on Estonian Junior Challenge like Ford Fiesta R2 cars, Pirelli tires and age. The competition has been very strong this year in every round and it is expected that it continues at Shell Helix Rally Estonia, the Official WRC Promotional event.

The leaders of the series after three rounds are Ken Torn and Kauri Pannas. They have won two rounds of FIA ERC 2019 in ERC 3 Junior class with M-Sport Ford Fiesta R2T.

Ken Torn:
„The competition in Estonia has always been strong. All the guys are fast and there is nothing easy. It is very important to have event like this in Estonia and it’s clear that all the focus is on the big boys with WRC cars. But I’m sure we will put also a great show to follow. Rally Estonia has always been the rally with nice feeling, and we will enjoy this weekend. Our goal is to bring the car safely home and collect as many points as possible.”

Their advantage ahead of Robert Virves and Sander Pruul is 30 points. In the third place are Roland Poom and Ken Järveoja who are participating this year in Junior WRC and are currently fifth in there. Fourth is Kaspar Kasari with Gabriel Müürsepp and fifth Gregor Jeets with Kuldar Sikk.

Like said the Estonian Junior Challenge is held inside of the Estonian championship class EMV 3 which is for R2 cars. Georg Linnamägi, driving Peugeot 208 R2 with Volodymyr Korsia is another Estonian driver starting at Rally Estonia.

From the foreign drivers French Junior champion Adrien Fourmaux with Renaud Jamoul are for sure the one’s to watch. Same goes to Adam Westlund and Joakim Sjoberg who are leaders of Latvian championship in Junior class.