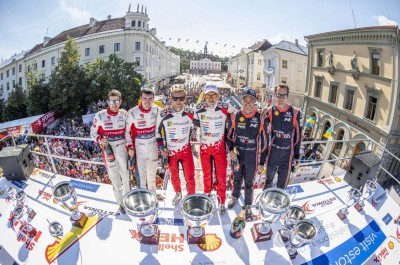 The long wait is over. Already this weekend Shell Helix Rally Estonia, the Official WRC Promotional event starts! Held on 12-14 of July offers a lot of action through all weekend and it is expected to have tens of thousands of spectators. The competitors come from all over the world, total 16 nations are represented.

All four WRC manufacturers are represented starting from Ott Tänak and Martin Järveoja from Toyota Gazoo Racing, last year’s Rally Estonia winners and current WRC leaders. Total 8 WRC cars are in the entry list, amongst them first Rally Estonia winners Markko Märtin and Kristo Kraag with latest generation Ford Fiesta WRC. The competition is strong in R5 class too as there are drivers from WRC and FIA ERC series. For Estonian R5 drivers it is great opportunity to compere their speed with world top drivers.

Shell Helix Rally Estonia starts with the shakedown on Friday 10.00. It is followed by the qualification stage for WRC cars held on Friday at 16.00

The activities of Shell Helix Rally Estonia in Tartu begin on Friday at 15.00, when the LHV autolaen Autoexpo is opened. It is situated next to the podium and opened until Sunday 18.00. The area of 2000 m2 is filled with different cars, activities and there will be a special areas for woman and kids too.

The first action on the podium at Tartu Raekoja square is on Friday at 18.00 when the opening of Tartu Mill triathlon takes place. Triathlon is held in Tartu on Saturday. It is followed by AHHAA center science theatre show. 19.00 starts the opening of Estonian summer games.

The opening ceremony of Official WRC Promotional event Shell Helix Rally Estonia is warmed up by Cityflash feat. Laura-Ly at 19:50. After that the TOP drivers will choose their starting positions. Next on the podium are WRC drivers who answer questions in WRC press conference style as it will be hosted by Becs Williams from WRC. After that the stage is ready for the speeches and official opening of Shell Helix Rally Estonia 2019.

The popular Estonian radio station MyHits sends then their best wishes to competitors and fans with their opening act starred by famous Estonian artists WATEVA, Elina Born and Emily J.

After the cars have driven over the podium it is time for the highlight of the evening. The official concert of Shell Helix Rally Estonia starts at 22:45 and is packed with stars from Estonia and Latvia. Those two Estonian artists are familiar to almost everyone. Anne Veski has enjoyed her popularity for decades and she is still one of the big names in Estonia. Nublu is an Estonian hip-hop artist who flew like a rocket to the Estonian music scene last summer. Latvia is represented at the concert by Musiqq. Their style is pop and R&B.

Saturday means it is time for the proper action on the stages. Total 9 stages on Saturday, first one 9.23. This is Maaritsa stage where is Leigo spectator area. This is new area, which made a debut last year and offers big Sportland jump and amazing views. The stage will be run twice. Rüa stage, also run twice has two spectator areas, famous Alaküla with Shell Helix jump and brand new Truuta area which the most innovative spectator area where thousands of rally fans can follow car jump, enjoy curves with different speed more then 45 seconds. Saturday ends with Elva City special and after that Elva hosts a big concert with main artist from Russia. Julia Volkova was part of the famous duo T.A.T.U.