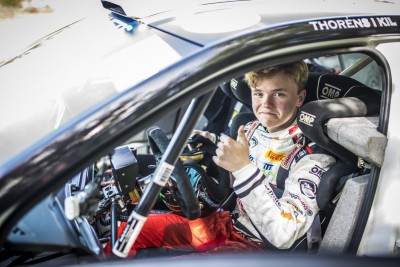 Oliver Solberg and Aaron Johnston are one of the podium favorites of the R5 class at Shell Helix Rally Estonia. They will drive Volkswagen Polo GTI R5. With the same car they won Rally Liepaja in the end of May which was a round of FIA European Rally Championship. This means that seventeen-year-old Solberg is the youngest FIA ERC rally winner. At Shell Helix Rally Estonia he starts for the second time, last year they finished second in R2 class.

Oliver, the son of the 2003 WRC World Champion Petter Solberg, switched this year from two-wheel drive car to R5 car. With Volkswagen Polo GTI R5 he participates with Aaron Johnston in the Latvian Championship and besides that with the Subaru in the United States North American Cup. In Estonia and Latvia they are current championship leaders, in USA second after three rounds. At Shell Helix Rally Estonia he competes with the drivers from WRC series like Teemu Suninen and Takamoto Katsuta with all-new Ford Fiesta R5 and Eerik Pietarinen and Nikolay Gryazin with Škoda Fabia R5 cars.

Oliver Solberg:
“I am really looking forward to Rally Estonia, I did the event last year and I like it a lot. It will be so exciting to have this great competition with for example Teemu Sunninen. It will be great learning experience and I can’t wait to be behind the steering wheel again.”

Urmo Aava, Shell Helix Rally Estonia director:
“Oliver Solberg is the driver to follow. The fact that his team has chosen the Baltic states to start his rally career is a very strong message to other young drivers. I’ve been following his career and it is quite impressive what he has achieved. Looking forward to see him competing at Shell Helix Rally Estonia.”