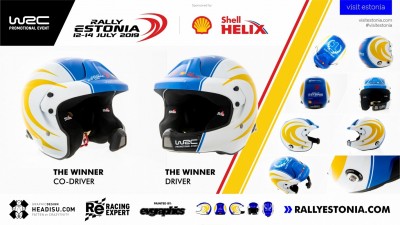 One of the traditions of Rally Estonia is that the winner of the rally receives winner’s trophy helmet which has a different design each year. The news is that instead of one helmet like in previous events this year the winners will receive two identical helmets. The winners of Shell Helix Rally Estonia can put their helmets on in the awarding ceremony which takes place on Sunday July 14 at the podium in Tartu Raekoja square.

This year’s entry list includes many drivers who have previously won Rally Estonia and the trophy helmet. In 2010 Markko Märtin and Kristo Kraag were the winners of the inaugural event. This year they are back with the latest generation Ford Fiesta WRC from M-Sport. Georg Gross and Raigo Mõlder won Rally Estonia 2013 and in 2019 will they drive OT Racing’s Ford Fiesta WRC. In 2016 when Rally Estonia was a round of FIA ERC for the third time the winners were Ralfs Sirmacis and Maris Kulšs. Sirmacis has now a new co-driver Ralfs Igavens and they will start with Mitsubishi Lancer EVO X. Ott Tänak has won Rally Estonia twice, 2014 and 2018. His co-drivers were Raigo Mõlder and Martin Järveoja. Last year’s winners are back and Ott is ready for the hunt of his third Rally Estonia trophy helmet with Martin Järveoja and Toyota Yaris WRC.

The design of the Shell Helix Rally Estonia trophy helmets comes from Kristjan Tramberg and headisu.com. Stilo racing helmets are from Racingexpert and they are hand painted in Finland. Evgraphics is a well known company and has delivered helmets to many known drivers like F1 driver Valtteri Bottas and Esapekka Lappi who will start at Shell Helix Rally Estonia with Citroen C3 WRC.