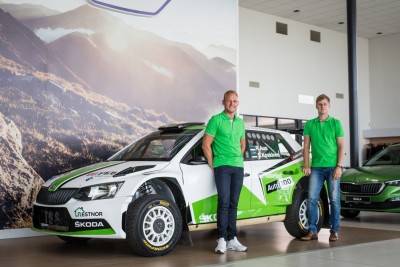 Rainer Aus and Simo Koskinen who have previosly achieved two podium places at Rally Estonia are ready for their debut with R5 car. They will drive Škoda Fabia R5 from ex-WRC driver Toni Gardemeister’s team TGS Worldwide and it will happen in cooperation with Škoda importer Auto 100 and Pirelli.

For Aus and Koskinen Rally Estonia has been always a rally where they have shown good results. In 2015 and 2016 when Rally Estonia was a round of FIA ERC series they finished both events in third place. This year when Rally Estonia is an Official WRC Promotional event and the competition is strong, they fulfilled their dream to start with R5 car.

“We are extremely happy to compete for the first time with Škoda Fabia R5 car. This is something we have had in mind for a long time. It’s no coincidence that we have chosen together with Auto 100 and other partners for Shell Helix Rally Estonia for this to happen. This is the biggest autosport event in the Baltics and competition in R5 class looks just amazing. Plus all the atmosphere with the fans and entertainment through the weekend. The stages of Rally Estonia have always been my favorite and I can’t wait to drive them with Škoda Fabia R5.”

Janek Aavik, member of the board Auto 100 AS:

“Škoda Fabia R5 is one the top cars in R5 class. Škoda has contributed a lot to this project and rally wins around the world and World Championship titles affirm its greatness. Rally Estonia is an outstanding event which is followed on-site by tens of thousands of people. For us it’s important that we can help Rainer Aus and Simo Koskinen to compete with a good car and I’m sure they can achieve good result with Škoda Fabia R5.”

Urmo Aava, Shell Helix Rally Estonia director says that it is very positive that Škoda which is dominating in WRC 2 is also contributing to Estonian autosport.

“Škoda is amongst the top manufacturers in WRC and the fact that Estonian importer Auto 100 is willing to help Estonian drivers is a very positive sign. I’m glad that Rainer Aus and Simo Koskinen have chosen for their debut with Škoda Fabia R5 Shell Helix Rally Estonia. Looking back to their results here I’m sure they will be very competitive in R5 class.