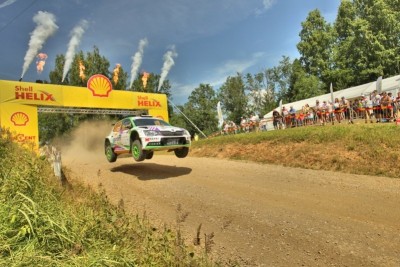 Shell Helix Rally Estonia an Official WRC Promotional event held on 12-14 of July has always been important event for the Estonian drivers. This year is no exception as local heros with R5 cars can compare their pace with international competitors. Raul Jeets, Priit Koik and Karl Martin Volver have all participated many times at Rally Estonia, one thing in common for them this year is that they all driving R5 cars.

Raul Jeets who has longest history at Rally Estonia will drive Skoda Fabia R5 car prepared by Sports Racing Technology team. Team Tehase Auto Raul Jeets and Andrus Toom have started at all Rally Estonia events during the years. Andrus Toom was replaced just once by Erik Lepikson. Last four times have they used R5 car and their best result, fourth, comes from 2016 when Rally Estonia was a round of the FIA ERC series.

Raul Jeets:
“First I would like to praise the organizers for delivering such a great event with WRC trademark. Our experience with the R5 car here allows us to aim a good result. Third place after two WRC cars in last month’s Viru rally showed that we are moving in the right direction. Car feels great and team is giving their maximum. This means we are ready to fight for the top places in R5 class. To see more Estonians driving R5 cars makes it even more exciting.”

For Priit Koik its sixth time to start at Rally Estonia. He used to drive BMW and Ford Fiesta Proto but this season has he moved forward and drives Ford Fiesta R5 prepared by Kaur Motorsport. Before Rally Estonia has he done two rallies and starting from Viru rally has he a new co-driver Kristo Tamm.

„The entry list looks amazing. We had our first experience with R5 car at Rally Liepaja where we finished in 12thplace. The first impression and comparison with FIA ERC top drivers was positive and car feels amazing. Looking at the competition here I think the result in TOP 10 amongst R5 cars is something we can be satisfied.”

Young Karl Martin Volver is ready for his debut with 4WD car. He will use Skoda Fabia R5 from ex-WRC driver Toni Gardemeister’s team TGS Worldwide.

„We didn’t had many options in the end of the last season when we finished ADAC Opel Rallye Cup in third place. I have done some competitions with crossckart and we decided to work for the Rally Estonia and R5 project. Our sponsors loved the idea and as here are many big teams present I believe that good result here can help to open some doors in the future. Our goal is to finish the rally and improve stage by stage.”