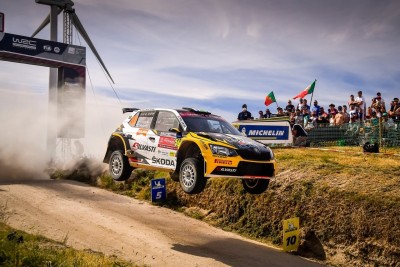 Eerik Pietarinen is one of the names to remember. Young Finn and his co-driver Juhana Raitanen won last year’s Shell Helix Rally Estonia in R5 category and showed impressive pace in Rally Finland where they were winners of WRC 2 class. They will come back to defend their last year victory at Shell Helix Rally Estonia which is named this year as an Official WRC Promotional event.

Last year was successful for Pietarinen and Raitanen as they won Finnish championship in their first year with R5 car. Those results and their pace helped them to step forward and in 2019 they compete at 4 rounds of WRC 2 with Skoda Fabia R5 car prepared by TGS Worldwide. This year’s best result so far comes from Rally Portugal where they were 4thin WRC 2. Besides WRC they compete also in ADAC Opel Rally Cup where they are leaders of the series. At Shell Helix Rally Estonia they will compete with new Skoda Fabia R5 evo.

“We have such great memories from last year at Rally Estonia. The stages were amazing and those jumps, you just have to enjoy them! Like last year our main goal is to prepare ourselves and the car for Rally Finland. It is once again good to see strong competition in R5 class at Rally Estonia and we’re looking forward to great battles on the stages.”

This is the first time when two new generation R5 cars will go head to head. Eerik Pietarinen with the new Skoda Fabia R5 evo and Teemu Suninen with the all-new Ford Fiesta R5 car.

“We were privileged to witness the speed of young Finnish driver Eerik Pietarinen and his c-odriver Juhana Raitanen at Shell Helix Rally Estonia. The earlier results and victory in WRC 2 at Rally Finland showed that it wasn’t coincidence. I believe that starting at Shell Helix Rally Estonia will be helpful for them this year too. Besides WRC Manufacturers teams with world top drivers we are very happy to have such a strong competition in R5 class.”