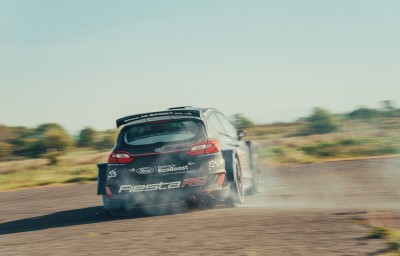 The competition in R5 class at Shell Helix Rally Estonia just got more interesting as M-Sport team announced Teemu Suninen starting with all-new Ford Fiesta R5 car. Rally Estonia held on 12-14 of July is an Official WRC Promotional event and for both M-Sport and rally organisers is very exciting to see new Ford Fiesta R5 competing for the first time against its rivals.

The all-new EcoBoost-powered Ford Fiesta R5 promotes the latest motorsport technology and road-going design. M‑Sport has worked closely with the Ford Motor Company to ensure the new Fiesta R5 provides a big step forward in terms of pace and performance.

“The Ford Fiesta R5 is our most successful global rally car. It’s a very special car for M-Sport and even though the original cars continue to win rallies and championships all over the world, we have taken our time to ensure this new model is even better with performance gains in every area.”

This news means M-Sport are coming to Rally Estonia with two cars as Elfyn Evans’ participation was announced last week.

It’s no wonder M-Sport choose the young Finn to drive the Fiesta R5 for the first time in competition as Suninen has shown good pace this season. His best result from this season is 4thplace in Rally Portugal. In overall classification he is 6th. For Rally Estonia he switches from the Ford Fiesta WRC to the Ford Fiesta R5 car and is quite excited.

“Rally Estonia seems to get bigger and better every year so I’m excited to see what they have to offer this time! The stages there are really fast – just like in Finland – and it’s always a thrill to drive flat-out on roads like that.

“This year I’ll be driving the new Fiesta R5 and I’m sure a lot of drivers will be interested in this car. The guys at M-Sport have been working really hard and they know how to deliver a fast and reliable car straight out of the box. And I’m excited to show what this new car can do on these super-fast roads!”

As said before Ford Fiesta R5 is very important project for M-Sport and the team is happy that they can introduce it in competition for the first time in Estonia.

“This year’s Rally Estonia is going to be incredible. It seems as though everyone is competing there this year, and we’re excited to bring the brand-new Ford Fiesta R5 along for the ride!

“This car has been a long time coming, and I think a lot of people are excited to see it. The current Fiesta R5 continues to win rallies and championships around the world, but we’ve taken a big step forward with this new model.

“We’re really proud of this one, and the Estonian fans will be some the first to see it driven in competition – and with Teemu behind the wheel you know it will be driven pretty damn fast!”

With M-Sport joining with Fiesta R5 car the competition in R5 class got even more interesting. One of the targets during the years for the organisers is to have good international competition in every class.

“As an ex-driver it is always interesting for me to see new models or evolutions of the rally cars. From information I have and pictures I’ve seen new Fiesta R5 looks amazing and I’m sure M-Sport has taken a huge step forward with it. From the Rally Estonia side I’m honoured that M-Sport has chosen our event as one of the first competitions for the Fiesta R5. The competition in this class looks good and we’re working hard to deliver some more interesting names in this class.”