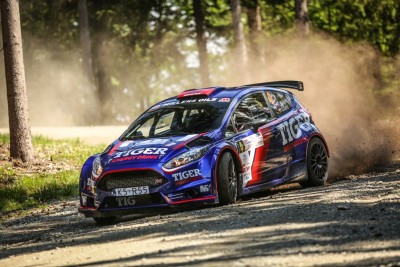 Shell Helix Rally Estonia is popular amongst the Polish drivers. Many of them have been participating here during the years and this year is no exception. The winners of the last round in Poland, Silesia Rally Tomasz Kasperczyk and Damian Syty have shown good pace on home soil and now it’s time for them to test their skills again in Estonia. Kasperczyk and Syty, currently in second place in Polish Championship are driving Ford Fiesta R5 car.

Their entry makes R5 class once again more competitive, now there are drivers from Poland, Finland, Lithuania, Latvia and Estonia. Kasperczyk and Syty have shown good progress during the years in Polish championship, they have now two victories in series, the were winners of Rally Śląska also last year. With this result they clinched the Polish Rally Championship runner-up spot in 2017 season.

Tomasz Kasperczyk: “In recent outings I have improved my tarmac pace, which makes me very glad. However, there are two important gravel events ahead of us in Polish Rally Championship. The second one – Rally Poland is particularly important, because there is twice as many points to score. This means that it might be crucial in the championship battle. I want to prepare to this outings as good as I can. My goal is to improve my pace on gravel and there is no better place to do this than Rally Estonia with its crazy fast, yet very demanding stages. In Polish Rally Championship I need to be clever. There are many events with tight corners, bumpy tarmac and other conditions, which do not let you keep your foot down all the time. Rally Estonia is a different story, which gives me thrills. I am looking forward to all these jumps and fast corners. Bring it on!”

Urmo Aava, Director of Shell Helix Rally Estonia: “We have really great competition in R5 class and most important is that the drivers come from very different countries and bring many fans with them. I have been following Tomasz’s career and can say that the progress he and Damian have made is impressive. It is also important that their team, Tiger Rally Team have same goals like we do. We both want to make our sport more attractive to the fans and drivers.”

Otepää which is known as a winter resort offers great opportunities for the technical centre of the rally. Service park and HQ are located in Otepää at Tehvandi Sport Centre. Besides Tartu, Elva hosts another Super Special and the gravel stages in South-Estonia are considered as the best in the country