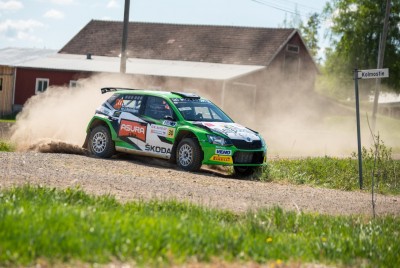 One more strong and promising young Finnish driver will be starting in the biggest autosport event in the Baltics, Shell Helix Rally Estonia held 13-15 July. Eerik Pietarinen and Juhana Raitanen have been ruling the Finnish Championship and are the leaders in class SM1 after the fifth round. As Aron Domzala from Poland they will also be driving Skoda Fabia R5 by ex-WRC driver Toni Gardemeister’s team TGS Worldwide.

Pietarinen and Raitanen are 2017 Finnish champions in SM2 class. They are one of the main favorites for the R5 class win in Shell Helix Rally Estonia. Participating in such a fast rally is good for them as they will do a debut with R5 car in this year’s Rally Finland.

Eerik Pietarinen: „Rally Estonia is a very important event for us as it is a very fast rally. We use this as a preparation for Rally Finland and I’m sure we will find good pace in Estonia. Also the competition is very strong, many good drivers with R5 cars and it is good to compete with top WRC cars. Our aim is to be in top of the R5 class.“

Urmo Aava: „Eerik and Juhana are definitely bringing more competition to R5 class. It is good to see them fighting with Jari Huttunen and Antti Linnaketo from Hyundai Motorsport. In addition, we have fast drivers in this class coming also from the Baltics and Poland.”