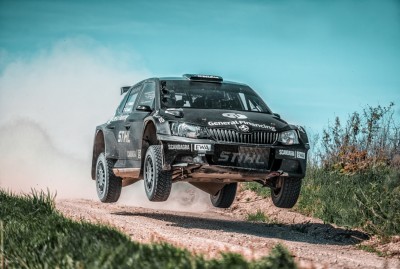 The biggest autosport event in the Baltics, Shell Helix Rally Estonia held on 13-15 of July brings together top WRC drivers like Hayden Paddon and Craig Breen as well as best ones from the Baltics. Benediktas Vanagas is one of the most popular autosport drivers in Lithuania and it is his third time in Rally Estonia. He will be driving Skoda Fabia R5 with his co-driver Mindaugas Čepulis. It is the first season for the pair driving together. Vanagas is mostly known for participating in Dakar marathon rally but he is also a very active competitor in many Lithuanian and Baltics rally championship stages. In Lithuania he is a well-known opinion leader and organiser of many big sport events.

Vanagas made his first appearance in Dakar in 2013 and achieved his best result in 2015 when he was the 1st among private teams. 2016 he was part of the winning team “General Financing Team Pitlane” in the 1000 km race in Palanga. As a really driver he has achieved many podium places in Baltic rallies. In 2012 he was 4th in N4 class in Rally Sweden. Since last year he is using Skoda Fabia R5 car and with it won the prestigious Winter Rally in Lithuania.

Benediktas Vanagas, General Financing Team Pitlane: “It is a big honour to start in Shell Helix Rally Estonia as I am sure it will be the best ranked rally in the Baltic region with huge competition as well as crowds of spectators.”

The official opening and awards ceremony will take place in Tartu, the second biggest city in Estonia. Tartu is an entertainment centre of Shell Helix Rally Estonia and the main artist of the official concert is Russian superstar Nyusha. Otepää which is known as a winter resort offers great opportunities for the technical centre of the rally. Service park and HQ are located in Otepää at Tehvandi Sport Centre. Besides Tartu, Elva hosts another Super Special and the gravel stages in South-Estonia are considered as the best in the country.