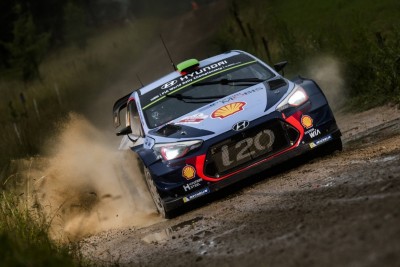 Shell Helix Rally Estonia, the biggest autosports event in the Baltics will be run on 13-15 of July in Tartu and on fast South-Estonian gravel roads. One goal the organisers set was to have WRC teams competing in Estonia. Now, six months before the event we can announce that Hyundai Motorsport’s Hyundai i20 Coupe WRC with Hayden Paddon and Sebastian Marshall will start at Shell Helix Rally Estonia 2018.

This is the first time for a Hyundai i20 Coupe WRC car to compete in the Baltics and the same goes for Hayden Paddon. Sebastian Marshall participated in Rally Estonia in 2011. As has been the case for other WRC teams who have competed and tested in Estonia, it is a good preparation before Rally Finland for Hyundai Motorsport too.

Alain Penasse Team Manager, Hyundai Motorsport: “We are very happy to participate in Shell Helix Rally Estonia this year with Hayden and Seb. We saw in the past other teams competing in the rally as a pre-event test for Rally Finland and it seemed to work quite well so this year we decided to follow this good example and join with one of our Hyundai i20 Coupe WRC cars. The roads in Estonia are fast and flowing and I’m sure this is the ideal event to prepare for our WRC outing in Finland a couple of weeks later. The spectators there are also very passionate and huge rally fans so it will be great to give them some entertainment – I’m sure they will enjoy watching our WRC car in action!”

Hayden Paddon: “I’m really looking forward to Shell Helix Rally Estonia in July. I’ve always followed it closely in the previous years and have really liked the looks of the fast flowing roads – which are my favourite type. It will also be a great preparation for Rally Finland and we will use this opportunity as a test session in competitive conditions. It will be also great to bring our WRC car to Rally Estonia on what will be a very fast rally and I’m sure the spectators will enjoy seeing us in action there.”

Urmo Aava, director of Shell Helix Rally Estonia: „Having Hyundai Motorsport team at our rally is a big honour for us. We believe that we can offer them great value as they are going to use Shell Helix Rally Estonia as a part of their preparation before Rally Finland. Our targets organising a rally are safety and innovation and this is something I believe teams in WRC series expect from rallies. I’m sure Hayden and Seb will enjoy Estonian fast stages and fans are delighted to see Hyundai i20 Coupe WRC for the first time in action in the Baltics.“

Shell Helix Rally Estonia 2018 will be held on the roads of Tartu, Otepää and South Estonia. Tartu is the entertainment centre of the rally, the service area is located in Otepää at Tehvandi Sports Centre and special stages will be run in South Estonia.