Shell is a new title sponsor of Rally Estonia 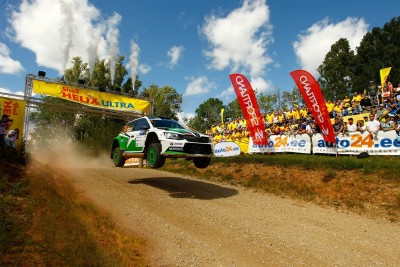 Rally Estonia, the biggest autosports event the in Baltics and Eastern Europe will be run on 13-15 of July in Tartu and on fast South-Estonian gravel roads. Starting from this year Rally Estonia has a new title sponsor, Shell. Being a company with long traditions, Shell is one of the best known lubricant suppliers in the world. Shell has been a major support of ralling from the sport’s earliest days. The feats of endurance performed in early rallies around the world by road-legal vehicles-often in extrem weather conditions-created unique opportunities to underline the quality of Shell products.

The cooperation with Rally Estonia is very unique in Estonia and the Baltics when one of the best known brands in the world becomes a title sponsor of a top event in Estonia. The official name of the rally is Shell Helix Rally Estonia.

Winfred Gorissen, Distributor Account Manager Nordics & Baltics: “Shell was very much impressed by Rally Estonia over the recent years. It was organized in a very professional way, and our customers, partners and ourselves enjoyed being there. Shell is very much involved in Motorsports in general, and more specific through the sponsorship of the Hyundai WRC team. Because of this, and our ambition to grow further in the Baltic’s, we were more than willing to take the opportunity to become title sponsor of Rally Estonia.”

Merike Ametmaa, marketing coordinator of Shell Lubricants product at Jungent Baltics: „Rally Estonia has been a top event in the Baltics for many years. The high level of organisation and ambitious plans were the key factors for starting the first meetings and discussions in this matter. Shell has been involved in motorsports for a long time and has obtained valuable experiences and knowledge from it. A good example is Shell PurePlus technology which is unique in the world. All the Shell Helix Ultra lubricants are based on this technology. Shell is the sole lubricant supplier to the Hyundai Shell World Rally Team: in fact, Shell is supplying the team with a number of motor oil containig PurePlus Technology. What does it mean for end customers? They can use the same quality of Shell Helix PurePlus as Hyundai i20 Coupe WRC cars in WRC for their car engine. Rally Estonia and Shell share the same values – to be at the top of their field and move on with innovation and technologies.“

Margus Tomberg, member of the board, auto24 AS : „At auto24 we are pleased that we can hand over title sponsor position to Shell. Their history in motorsport is remarkable. We will continue as a Shell Helix Rally Estonia media partner and try to be involved in many ways in this great event.“

Urmo Aava, Director of Shell Helix Rally Estonia: „Before we started the talks with the potential new main partner we set some details straight. Bearing in mind our plans for the future, the new partner had to be an international brand having former connections with motorsports. Shell has been involved in different technical partnership for motorsports for a long time We have had successful cooperation with Shell during earlier years and in the Baltic partnership the members of their European management are also involved. So both sides know very well who we are, what we are doing and how will we achieve it. It is an important cooperation where both Rally Estonia and Shell have their own vision of the bigger picture. Through Hyundai Motorsport Shell is already involved with WRC series and our long term goal is to be a WRC event. As for us the Baltic region is very important, we were looking for a long term collaboration with brands and Companies that have strong experties and passion. For Shell Helix Rally Estonia- says Urmo Aava- safety is at first place and we are proud to share this value with Shell.“

Shell Helix Rally Estonia 2018 will be held on the roads of Tartu, Otepää and South Estonia. Tartu is an entertainment centre of the rally, the service area is located in Otepää at Tehvandi Sports Centre and special stages will take place in South Estonia.