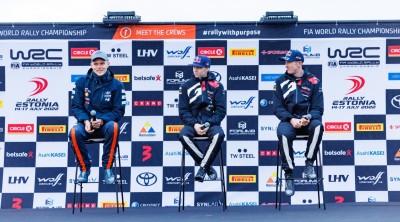 The first full day of Rally Estonia, the seventh round of the FIA ​​World Rally Championship, was held on Friday, 15 July. The total of eight stages were tackled on Friday.

Elfyn Evans / Scott Martin (Toyota GR Yaris Rally1) had the best start of the day in volatile conditions, winning five stages in a row. During the second passing of Mustvee stage the first stage victory of this year's Rally Estonia was taken by the World Championship leaders Kalle Rovanperä / Jonne Halttunen (Toyota GR Yaris Rally1), who reduced the gap with their teammates with each remaining stage and became the leaders of the rally at the end of the day. The gap between two Toyota racing pairs before Saturday's stages is 11.7 seconds.

Ott Tänak / Martin Järveoja (Hyundai i20 N Rally1) driving on home roads showed TOP3 times in six out of eight stages, but unfortunately, in the last stage of the day driven in heavy rain, the windshield of their Hyundai fogged up for technical reasons and as much as 23.4 seconds were lost with the stage. Fortunately, this did not change their overall position and the Estonians finished the day at the third place. They are 44.3 seconds behind the leaders.

"I can be honest and say that I pushed pretty hard. Quite a few times it wasn't comfortable. Not the most enjoyable from our perspective, but we did the best we could. We tried to develop and learn as much as possible. Sometimes we made wrong decisions and then right decisions, but that's the only way to learn. We came here without preparation, so it is not easy to adapt immediately on these fast roads," Tänak said during the Meet The Crews interview held in the service park of the Estonian National Museum.

The best of Friday's rally day in the Junior WRC category were Sami Pajari / Enni Mälkönen (Ford Fiesta Rally3). Their lead over compatriots Lauri Joona / Mikael Korhonen (Ford Fiesta Rally3) is 56 seconds. Robert Virves / Julia Thulin fought for the first place up to the eighth stage, but then hit a rock with the left wheel of the car and lost time. They face Saturday in the fourth place.

The opening and closing events of Tartu Superenduro 2022, which took place on the start and finsih podium of Rally Estonia, ended Friday's rally day of Rally Estonia, which offered excitement and drama. Meanwhile, the winner of the 8th season of Estonian Top Idol, the bright and talented Alika Milova performed for the audience.

Rally Estonia continues on Saturday with nine stages, during which 95.02 test kilometres will be covered. The participants of the Estonian championships will compete in four stages on Saturday.

On Saturday, 16 July, the start podium and exhibition of the vintage vehicles will take place on the Town Hall Square. At 20:00, Rita Ray, one of the most unique artists of the recent years having won the hearts of the audience very quickly, will perform on Tartu Town Hall Square. After the concert the awards will be given on the same podium to the best rally drivers who participated in the Estonian Championship at Rally Estonia.

WRC Rally Estonia is the round of 2022 FIA World Rally Championship, which will be held in Tartu and in rural municipalities of Tartu, Otepää, Elva, Kanepi, Kambja, Peipsiääre and Mustvee on 14-17 July 2022.