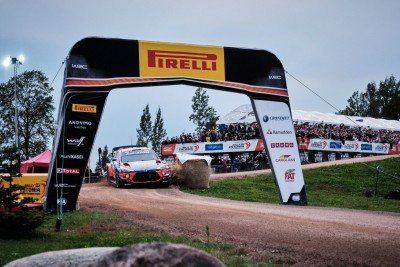 The first Estonian round of the FIA World Rally Championship was organized with only 63 days. Rally Estonia, held in exceptional circumstances, was the first global title competition with such a large audience that was organized under the conditions of COVID-19 and ended without any cases of infection. This safe big event was successful thanks to the joint effort and well-considered actions of organizers and spectators.

SYNLAB, the cooperation partner Rally Estonia, performed a total of 1337 coronavirus tests for the people involved in the organization and competition before and during the rally, all of which were negative.

A total of 26 000 local people took part in Rally Estonia events, including the people involved in the organization, competitors and teams, audience and local residents who were within the perimeter of the rally and their guests. The spectators who had to adapt to the exceptional conditions were very cooperative and sympathetically accepted the requirement to wear a mask in the rally spectator areas, established only two days before the start of the rally, are worthy of particular praise. This perception of personal responsibility was one of the important keys why, despite of the dramatic surge of virus before rally, no outbreaks of infection or new cases of infection occurred among the rally audience.

Jüri Ratas, Prime Minister of the Republic of Estonia: “If experts contribute wholeheartedly, even the impossible becomes possible. This is exactly the principle reaffirmed by Rally Estonia team this year. It is an obvious challenge to offer great experiences to rally fans all around the world for the first time and in a new level in the context of an indefinite crisis without endangering anyone's health. The organizers of the event that took place in Estonia this year had enough will and intelligence to deal with it excellently. I believe that this is just the beginning - thanks to Rally Estonia team rally fans will gather in Estonia and enjoy new experiences over and over again.”

Yves Matton, FIA Rally director: "Estonia’s confirmation for 2021 is the well-deserved reward for the hard work and commitment demonstrated by the Estonian Autosport Union and the Rally Estonia team to organise a safe and successful event with a solid COVID-19 protocol this year. This achievement was also made possible thanks to the support of the Estonian Government: together, they have fulfilled all expectations. I believe Estonia’s presence in the calendar also brings a fresh approach to the championship as they are showcasing new ideas - for example with the use of new technologies - which could very well benefit other countries. I look forward to next year’s edition.“

Jona Siebel, managing director of WRC Promoter: “In the current Covid-19 climate, we are fully committed to our duty of care to protect both the WRC family – and that means competitors, teams, officials, supplier and media – and the local community. Providing access in a safe and responsible way was the most important aspect of the championship’s restart event in Estonia. The absence of any new cases of Coronavirus infection during rally week is a clear indication of the success of the measures implemented and the willingness of everyone involved to adhere to those strict guidelines. The championship gained valuable experience and understanding of managing the challenges created by Covid-19 to carry forward. Estonia’s championship debut proved a massive success across all aspects of the event, even more so given the short time available to the organisers to prepare the rally. The reward for the entire organising team is a place in the 2021 calendar – an achievement that is fully deserved.”

Urmo Aava, director of Rally Estonia: “The organizing team of Rally Estonia has developed within 10 years into a team that can overcome even seemingly insurmountable difficulties. Our cooperation with all our partners is equally important. We are happy that we were trusted and obtained the right to organize the Estonian first WRC rally. When looking back to it today, I can say for sure that together we succeeded 101%. The three strategic partners have a very important role to play in all this. The state of Estonia which contributed to the conduct of the round of FIA ​​WRC World Rally Championship both financially and structurally together with various ministries and agencies. The large ​​work file Return to Motorsport, created by the International Automobile Federation FIA, was the basis for us to be able to successfully create our own documentation. FIA ​​also involved its experienced professionals before and during the rally and this support was invaluable. WRC Promoter, with whom we have been cooperating since 2018. Estonia received this opportunity thanks to their trust and offering and their team was a great help for us in organizing the rally. The outputs provided by them were certainly extremely attractive to Estonia as an organizing country.“

Estonia manifested itself to the world as a capable country where it is possible to organize such a big event in a short time. This was ensured by the following factors, through which Estonia is now even better known in the world - highly developed innovative information technology solutions, safe environment for competitors as well as audience, strong legal system, clean and unspoilt nature, emotional but conscientious people with the highest hopes for themselves and others.

Rally Estonia is the round of the 2021 FIA World Rally Championship which will be held in Tartu and Southern Estonia on 15- 18 July 2021.